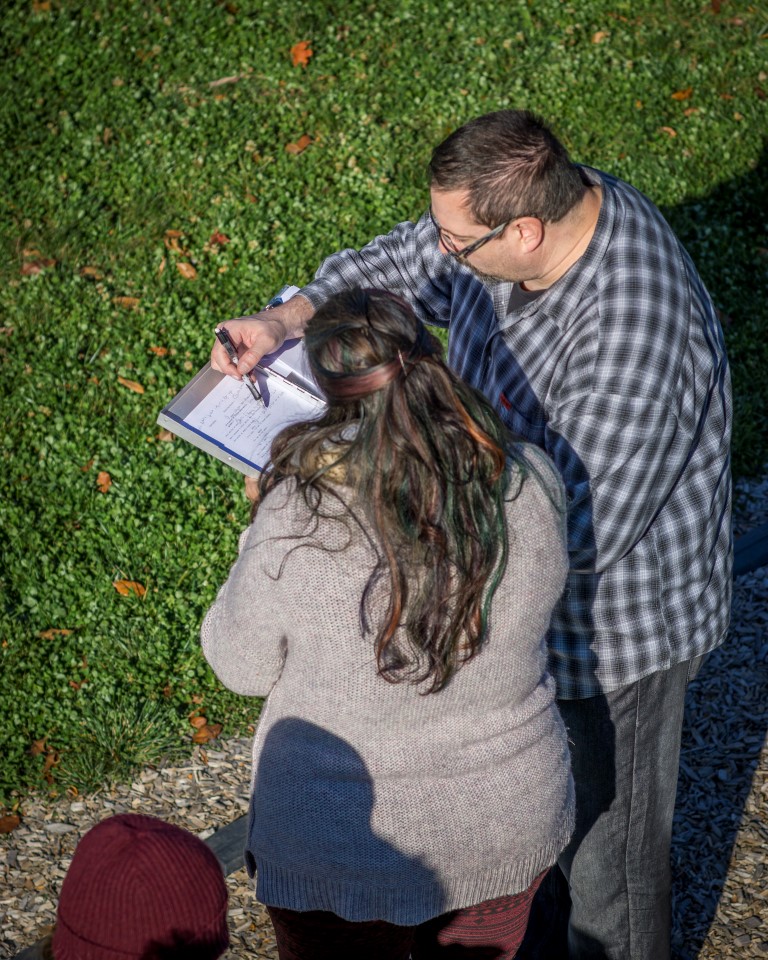 One small act of kindness can change someone’s story. This statement is the theme of Ramsey Stoneburner’s first feature film, The Shoes. The thirty-minute short is now being developed into a full-length feature film, led by a team of strong female filmmakers like Director Ramsey Stoneburner and Assistant Director Amanda Miller, and male filmmakers such as award winning screenwriter Michael E. Bierman and Cinematographer Chris Carson. Stoneburner herself wears many hats on set for the new feature film. She sits down to give me the inside scoop about the unorthodox way she got into filmmaking, the process of expanding a short into a feature, and much more:

Your movie – tell me all that you can about plot of the story and how you first came up with the idea.

“So, the movie started as a short. It was a concept that my daughter—who, at the time, was six years old— had thought up about a little girl who, you know, had some troubles in her life. Then, this girl meets a bully and decides to be kind to her instead of lashing out. I thought it was just a wonderful teaching moment, so we turned it into a story, which evolved into a screenplay because I was working with a lot of creative filmmakers in the area at the time and I thought this would be a perfect opportunity for a lot of us. Like they say – “If you don’t have opportunity create opportunity” and that’s what we did.”

How was the process of making the short? How did you expand the story from a short to create a feature film? Did you add new characters and plot ideas or just expand upon the old ones?

“Originally, I wrote a script that worked as a short. A team of great local cast and crew then volunteered and was hired to develop the story into film with the goal of submitting to film festivals and having a great piece to use in our reels that we could all be proud of. It has grown into so much more than that.

Post-production of the short was a bit difficult since the limited budget we had was spent on craft services and catering, locations, travel and accommodations for non-Ohio based cast, and other things, that there was not much left to hire a proper editor and color corrector. With my experience in design I was able to put together a good short film, but always felt like it could be better. Fortunately for the feature we will have a professional editor on the team.

Since the film was initially written and developed as a short, there were naturally story lines and character arcs that were left untouched and undeveloped. This left opportunity to easily expand upon the story by adding additional characters, and giving existing characters more scenes and more dialogue. We dive into the characters more deeply, so it really gives the viewer a chance to understand what everyone is going through.”

As I understand, your daughter Jaylen has been a huge part of the movie. Tell me more about her and how she influenced you to pursue filmmaking? Were you a child actor or is it just Jaylen?

“She is the one who really got me in the industry, although I am a creator by nature and by heart, I received my degree of Applied Science in Graphic Design. But when my daughter expressed an interest in acting, I started researching it and I thought: “Why haven’t I been doing this the whole time instead?” It was one of the “AAAH” moments!

In our movie, she plays the part of a young girl who lives through a tragic moment. She has done a lot of other shorts and things; this is what she wants to do. She loves to make believe and pretend and be other people and other things. It is just natural for her to create other stories and play them out.

We are deep in production right now for the remaining scenes in the feature film. Shooting in multiple blocks is necessary since we are reusing some scenes from the short, and we have to get it done as quick as possible because of how fast my daughter is changing and growing.”

You have a really strong and focused message that you are trying to spread about “one small act of kindness.” Tell me how this message is developed and the mood it creates for the audience.

“The message is the biggest thing for us. We are trying to help people who may be going through troubles, whether it’s a child being bullied or bullying others, someone who is homeless, someone going through divorce, military veterans with PTSD, or just anyone really who may be experiencing difficulties. We want people to imagine walking a mile in their shoes. So many times, people find out that someone they love is being bullied or having problems that we immediately jump to their defense by blaming the offender and saying “they’re wrong” or “they shouldn’t be doing this” when, in reality, the struggles one might have to go through in their own life are greater than we would like to think, and can contribute to their choices and actions. This perpetual circle of behavior can be an endless, unless someone takes the first leap and offers up one small act of kindness. We kind of wanted to bring this to light in the movie to analyze and identify what each person was going through w hich might help you understand why they were acting the way they were.”

Ramsey Stoneburner constantly seeks to raise the bar for the quality of Independent films. She is bringing film opportunities to Dayton with her “local talent and a local crew” and she would love the support of the community for her “Ohio based production.” Stoneburner is a creator that never stops the prolongation of innovation in the arts. She invites the entire community to come walk a mile in The Shoes of her, and her entire team, as she makes her debut into the feature film world.

Written by our FilmDayton intern  Maya Vyas, a senior at Tippecanoe High School. She an aspiring screenwriter and film producer.