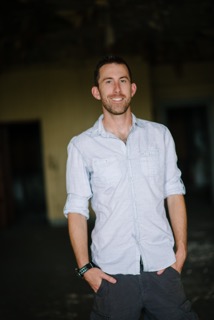 After living in Dayton most his life, graduating from Centerville High School, and then spending 4 years at Ohio University majoring in audio and media production, Ben Devine has gotten involved in the film world by writing and producing music for media of all kinds. He is constantly bettering himself and exploring new projects, working for companies in huge cities such as L.A., New York and London, but he has never left our small but mighty city, Dayton, Ohio.

When and how did you get into the film world?

“My brothers and I grew up creating all sorts of unique videos, it was a large part of our world. But it wasn’t until I went to school and started learning the technical details of the film world that put me on a more professional level.

I think what really hit home for me was when I got hired to do the score for a student film during my senior year. It was my first time doing it, I didn’t know what I was getting myself into, but right away it just clicked. I had an intuition for it, and knew immediately I was passionate about writing music for the moving image. I’ll never forget showing up for the premiere, it was quite nerve-racking. I didn’t know what to expect, but I showed up and there were a couple hundred people there. I thought it would be maybe 30 or 40 people, I guess it was a bigger deal than I originally thought! I just remember sitting there in the theatre and thinking ‘Oh my god, everyone is trapped in here and forced to listening to my music.’

Have you ever thought about living or working full time in a big city?

“I went through a long phase where I told myself “I’ve got to get out of here, I’ve got to get out of Dayton.” But straight out of college I didn’t really know what to do or who to turn to. I didn’t really know many people in the business. So I did what I thought I was supposed to do and looked for work in other cities. I figured I would turn to bigger cities like L.A. or New York,’ but in doing that I think I missed out on a lot of local stuff production. In retrospect, I see that you have to take advantage of the local gigs and people first, then branch out from there. I really think [FilmDayton’s] Film Connections are a great way to network and find people who do the same thing that you do and are passionate about it. As it turns out there is a lot more going on here than I initially expected!

There are a couple companies in L.A. and New York that I write music for now, and there is also a company in London, England called Cinephonix that I write for, mostly for motion picture advertising. It’s a pretty cool gig because every now and then I get a message saying: your music was used in China, France, Brazil etc.”

What exactly is your job description?

“I think this is where people get confused! I do a lot of different things: I do a lot of sound stuff; I do all sorts of audio production as well as video. I work location recording, mixing, and boom operating as well as the post-production such as film scoring, sound design, mixing and editing. I also love being behind the camera, an almost Director/Cinematographer role. I plan on working more of that in the future.

So I get a nice balance of being on set and around other talented people in the industry, then switching to the more time consuming (and lonely) process of being in my studio all day. So my social life primarily is being around my family and the days I get to be on set with everyone (laughing)

It can be a struggle in the freelance media production biz, especially starting out. I’ve been able to get my name out enough to attract the work, which is great. At times I get overworked, but it’s always better to be in a feast than a famine, no matter how stressful. Ben Devine attend the Before The League documentary premiere.

What are your current projects?

“I love to write music for films, as I mentioned before, and I worked on a film called Sasha (2016) and that was made by a group of people from New York . It turned out very well and premiered at the Cannes Film Festival. After that it won a bunch of awards at the New York City Indie Film Fest, one for directing, one for cinematography, and one for – drum roll – best original score! It’s only been in about ten film festivals but we will be submitting it to many more, especially as the fall rolls around, and even into the spring. But, really, if you can make it into Cannes then you can pretty much make it anywhere.

I also have several brothers who are video editors for movie trailers, one of which is working on Star Wars: Rogue One right now. Literally, right now, he is actually assembling trailers and TV spots. How cool is that? So what’s great for me is that I get to work with them on the audio side, writing custom sound design and music. So, hopefully, if the client approves, the trailer will finish for everyone to see.

I am also working on editing a feature film called All or Nothin’ about the Underground Railroad. We shot it mostly last year and are still have a couple scenes left to shoot. It is an independent film based on true events and characters known as “The 28” that escaped from Kentucky to Canada. I love working on it but it’s consuming all my time! After the edit, I will refasten my seatbelt and plug away at the post audio.

I work many random projects as well, like I’m editing, scoring and sound designing a short film called Autumn Shift. And last year I wrote sound design for a gyroscopic virtual reality experience. It’s crazy, something you would see in an amusement park. You basically get into this machine and strap on a helmet and it moves you around based on your in-game decisions.  You can hear some of his work here on Soundcloud.

Additionally, I plan on writing more music for streaming services like iTunes, Pandora, Google etc. I would like to take a stab at a Yoga album, something for those peaceful and meditational days.”

Ben Devine’s impressive and extensive record speaks for itself, showing that he is really as determined, original and creative as he seems. As a last message, Ben laughed at himself while sharing his biggest weakness as a filmmaker. “I’m bad at marketing for myself, so I guess people don’t realize all the little things that I do. I think I need to hire a PR firm or something to promote me. I guess you just have to try to connect with people when you are in this industry, it doesn’t matter how talented you are, if nobody is working with you and nobody knows about you then nothing is going to happen. So, on that note, if anyone needs help with their project, let me know!